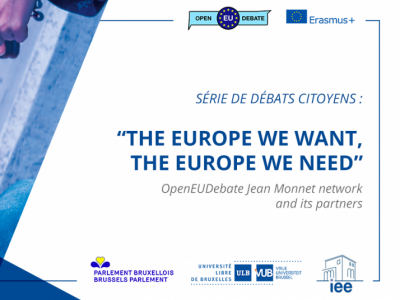 Looking ahead to the European elections in May 2019 and given the current state of the integration process and the challenges we have to tackle, the OpenEUDebate Jean Monnet network and its partners (University Autónoma de Madrid, Université libre de Bruxelles, Vrije Universiteit Brussel, Agenda Pública and the National School of Political Science and Public Administration in Bucharest) seek to create a forum for European citizens to debate the visions of our common future in Europe.

Citizens, civil society organisations and students from different EU member states are invited to share collectively their visions of Europe.

Groups of dialogue (in the “world café” format) will be organised during the conference and will be moderated by an academic or a journalist, who will serve as a rapporteur: a collective brainstorm aimed at bridging the gap between real and perceived problems, local and European contexts and to generate innovative ideas about Europe. The conclusions of the discussion groups will feed into a plenary wrap-up session with the guest speakers.

Three topics will be proposed for discussion to all the participants: – European leadership: What is your message for the next president of the European Commission?; – European policies: What are the main problems of Europe today? – European priorities: What should be the main priorities of the EU after 2019?

Online survey: An online survey helps the organizers to collect ideas in a bottom up process and allow those who are not able to attend the event to respond to the main topics proposed for discussion.

Do you want to share your ideas and express your concerns? Participate in the survey!