Giorgio Parisi, from Sapienza University of Rome, is Nobel Prize in Physics 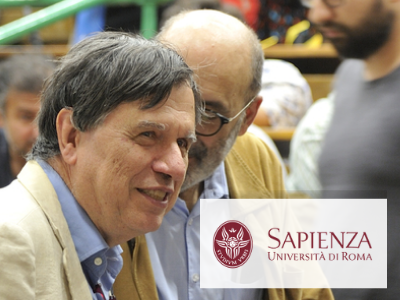 Giorgio Parisi is Nobel Prize in Physics 2021 “for the discovery of the interplay of disorder and fluctuations in physical systems from atomic to planetary scales“. The award was announced on Tuesday, October 5, by the Royal Swedish Academy of Sciences in Stockholm.

Giorgio Parisi is a Professor of Theoretical Physics at one of the Italian UNICA member universities, the Sapienza University of Rome, and former President of the Accademia dei Lincei.

According to the Press Release concerning this year’s laureates, Parisi’s discoveries “are among the most important contributions to the theory of complex systems. They make it possible to understand and describe many different and apparently entirely random materials and phenomena, not only in physics but also in other, very different areas, such as mathematics, biology, neuroscience and machine learning”.

About the recognition, the Rector from Sapienza University of Rome, Antonella Polimeni, commented that “Giorgio Parisi is a giant, one of those on whose shoulders future generations will sit to scan the horizon of science and take a further step towards knowledge“.

Together with Giorgio Parisi, Syukuro Manabe and Klaus Hasselman were also awarded the Nobel Prize in Physics 2021 “for the physical modelling of Earth’s climate, quantifying variability and reliably predicting global warming“.

UNICA is very proud of seeing such an achievement within the network. This recognition testifies the important work that scientists, lecturers, and researchers carry out in universities.

Congratulations to all laureates for the extraordinary work!

Born in Rome in 1948, Parisi completed his studies at Sapienza University of Rome where he graduated in physics in 1970 under Nicola Cabibbo’s guidance. He began his scientific career at INFN’s Frascati National Laboratories, first as a member of CNR-National Research Council of Italy( 1971-1973) and then as a researcher at INFN (1973-1981). During this period, he spent long periods abroad, first at Columbia University in New York (1973-1974), then at the Institut des Hautes Etudes Scientifiques in Bures-sur-Yvettes (1976-1977), and at the Ecole Normale Superieure in Paris (1977-1978).

In his scientific career, Giorgio Parisi has made many decisive and widely recognised contributions in different physics areas: particle physics, statistical mechanics, fluid dynamics, condensed matter, supercomputers. He has also written articles on neural networks, the immune system and group movement in animals. He has been the winner of two advanced grants from the Erc European Research Council, in 2010 and 2016, and is the author of over six hundred articles and contributions to scientific conferences and four books. In 2021, the Italian physicist was awarded the Wolf Prize and was the first Italian academic to be included in the Clarivate Citation Laureates list for “ground-breaking discoveries in quantum-chromodynamics and the study of complex disordered systems.”