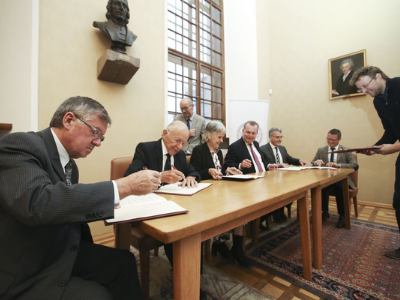 Five years after the signature of the Prague Declaration, Charles University and six European Networks, namely UNICA, EUA, LERU, Coimbra Group, and Europaeum, reaffirmed their commitment to academic values in a renewed version of the document titled A Message from the Heart of Europe (Prague Declaration II). The signature of the declaration took place at Charles University on 24 September, at a special meeting aimed at tackling challenges faced by institutions of higher learning.

The first Prague Declaration, back in 2016, was published on the occasion of the 700th anniversary of the birth of the King of Bohemia and Holy Roman Emperor, Charles IV, the founder of Charles University, and was signed by the rector of Charles University, the Czech Minister of Education, representatives of the Coimbra Group, Europeaum, UNICA and representatives of 79 universities throughout Europe and the USA.

Despite acknowledging cooperation between the institutions has been deepened since 2016, the signatories of the Prague Declaration II stress that the world is still “not a safer place” and that values and freedom needed to be upheld and defended, making possible a “common ground for creating the future of global society.”

The document presents universities as institutions of impact, capable of assuming a central role in overcoming global challenges “by enabling and supporting a free exchange of students, academics, staff, knowledge and best practices, by creating a universal polis of freedom and by nurturing and defending a common set of values and principles such as critical thinking and academic freedom”.

Finishing with the statement that “Global challenges need global solutions”, the signatories confirm they are committed to uphold “autonomy, freedom, humanism, open–mindedness, and respect for ‘otherness’”.

At the occasion of the signature of this new version, the Rector of Charles University, Tomáš Zima, talked about some of the current hurdles the world faces but ended on a hopeful note for the future: “in the last five years the world has changed, one-and-a-half years were swallowed by the pandemic, and we see rising populism, Brexit is behind us, and there are growing questions about sustainability. But Covid also showed there were many people who remained optimistic and did not think of themselves but helped others. I think that is an important message, along with freedom, open-mindedness, and the need to help in places of war and places were conditions are much worse.”