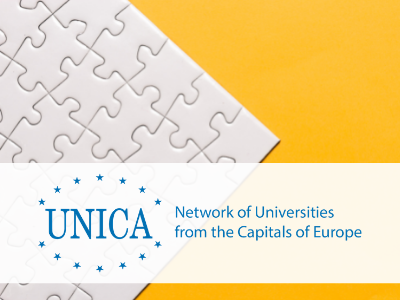 UNICA is proud to announce the new members of the network’s Steering Committee, following elections on Wednesday, 23 June 2021, during the annual General Assembly which, due to the pandemic, took place online. The five newly elected members will serve a mandate of two years, from 1 July 2021 to 30 June 2023.

The new executive body of the network includes two members from the previous mandate, one returning member who served in a former mandate, and two new members to this position.

The Steering Committee is the executive body of the Association: it meets four to five times per year and manages the activities of the Association, consults member universities regularly and is responsible for the implementation of the decisions of the General Assembly.

The Steering Committee is composed of the President and five persons elected by the General Assembly, who must be engaged in the higher management of a member university on the day of their election.

Prof. Carmela Calés Bourdet, Vice-Rector for Internationalization of Universidad Autónoma of Madrid, was re-elected for a second mandate in UNICA’s Steering Committee. She is a full Professor of Biochemistry and Molecular Biology. In her position as Vice-Rector, Prof. Carmela Calés Bourdet has been developing the UAM internationalization strategy since July 2017 and has been involved since the very beginning in CIVIS, the European University Alliance that has been selected for funding in the first pilot call.

Since 2018, she is one of the three elected vocal members of the CRUE (Spanish Rectors Conference) Executive Board for Internationalization and Development.

Prof. Sorin Costreie, Vice-Rector for Public Relations and University Networks of the University of Bucharest, will also serve is second mandate at the Steering Committee. Previously, he served as the Vice-Rector for International Relations and Vice-Dean of the Faculty of Philosophy in 2016 and 2017, and is a member of the University Senate since 2011. In between, in 2016, he was Adviser to the Minister and State Secretary in the Ministry of Education and Scientific Research.

He was the Head of the Quality Management Department (2008-2016). He is an Associate Professor at the Department of Theoretical Philosophy, University of Bucharest.

He was awarded several scholarships and fellowships to study for extended periods in Canada, United States, Germany, Spain, and Italy. He is member of various professional associations, and since 2014 he is member of the Steering Committee of the European Society of Analytic Philosophy.

Serge Jaumain is full Professor of Belgian and North American history at the Université libre de Bruxelles where he is co-director of the Interdisciplinary Centre for the Study of the Americas (AmericaS)  and the Brussels Institute for Advanced Studies (BrIAS).

His research focuses mainly on the evolution of mass retailing in Europe since the 19th century, the tourism history and the history of Francophone immigration in North America. He has written or edited some thirty books and the first trilingual (French/Dutch/English) MOOC on the Brussels-Capital Region entitled ” Brussels Decoded”

Hanna Snellman, DPhil, is professor of ethnology at the University of Helsinki since 2012. As a Vice-Rector, her responsibilities include international affairs, partnerships, public engagement, alumni cooperation and fundraising, particularly on the international stage, as well as the Finnish cultural heritage. She was also responsible for teaching, academic affairs and student admissions until 1.5.2021.

Before being appointed Vice-Rector, she served as the dean of the Faculty of Arts at the University of Helsinki in 2017–2018 and as a vice-dean of the same faculty in 2014–2016. She is also a member of ESFRI SWG Culture and Innovation, delegate as of 2020 as well as Finnish Research Infrastructure Committee, Academy of Finland, Member since 2019.

Luca Viganò is Global Envoy for King’s College London, supporting the Vice President/Vice Principal International alongside the Global Engagement team to lead the College’s international engagement. He is also the Vice Dean (Enterprise & Engagement) of the Faculty of Natural, Mathematical & Engineering Sciences, and a Professor and Head of the Cybersecurity Group at the Department of Informatics. His research focuses on formal methods and tools for the specification, verification and testing of cybersecurity and privacy.