17 October 2022 | From our Members - European Universities 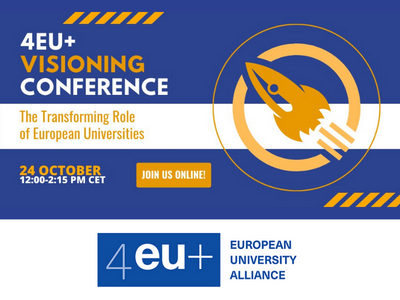 The 4EU+ European university Alliance, which includes three UNICA members – the University of Copenhagen, Charles University in Prague, and the University of Warsaw – invites the UNICA community to participate in the 4EU+ online Visioning Conference on “The Transforming Role of European Universities”, on the 24th of October, from 12h00 to 14h15 CET.

The Conference is open to students and staff communities of both alliances and non alliances’ universities.

Learn more about the programme and register at the website of 4EU+.

The European Universities Initiative is one of the flagship programmes of the European Union to build a European Education Area, co-developed by higher education institutions, student organisations, Member States and the European Commission.

With 40 out of the 56 UNICA member Universities taking part in European Universities alliances, UNICA has been following the evolution of this initiatives attentively by playing the role of an umbrella organisation. We encourage our members to participate in this process and organise sessions for university leaders and high level officers to share knowledge and good practices. Learn more about our recent events in this area.