Anton Zeilinger, from University of Vienna, is Nobel Prize in Physics 2022 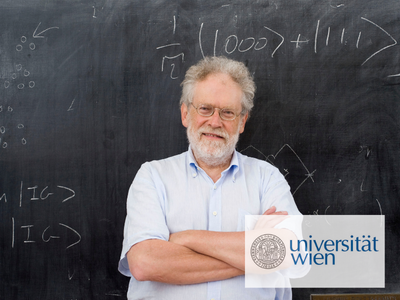 Anton Zeilinger is Nobel Prize in Physics 2022 “for experiments with entangled photons, establishing the violation of Bell inequalities and pioneering quantum information science“. The award was announced on 4 October 2022 by Professor Hans Ellegren, Secretary General of the Royal Swedish Academy of Sciences.

Anton Zeilinger is professor of physics at the University of Vienna and Senior Scientist at the Institute for Quantum Optics and Quantum Information at the Austrian Academy of Sciences. His research group has demonstrated a phenomenon called quantum teleportation, which makes it possible to move a quantum state from one particle to one at a distance.

For Anders Irbäck, Chair of the Nobel Committee for Physics, “It has become increasingly clear that a new kind of quantum technology is emerging. We can see that the laureates’ work with entangled states is of great importance, even beyond the fundamental questions about the interpretation of quantum mechanics“.

Together with Anton Zeilinger, John Clauser and Alain Aspect were also awarded the Nobel Prize in Physics 2022 “for experiments with entangled photons, establishing the violation of Bell inequalities and pioneering quantum information science“.

UNICA is very proud of seeing such an achievement within the network. This recognition testifies the important work that scientists, lecturers, and researchers carry out in universities.

Congratulations to all laureates for the extraordinary work!