European Research Area: UNICA and other organisations call for stakeholder voice in governance 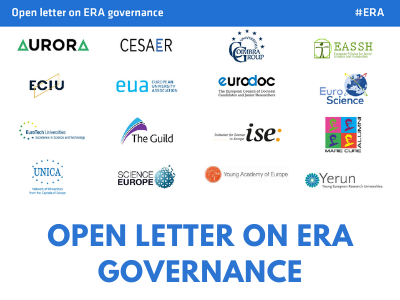 16 European research and innovation organisations, including UNICA, have published an open letter addressed to the EU institutions expressing the urgent need to include R&I stakeholders in the governance of the renewed European Research Area (ERA).

About the Open Letter

The letter comes at a crucial time as the Council of the European Union will finalise the ERA governance system at the end of November. Specifically, the letter highlights the necessity and added value of including R&I stakeholders in the co-creation and implementation of the new ERA.

“The R&I stakeholders provide high-quality, collective input from different communities within the R&I system, all of which are necessary to achieve an effective and resilient ERA,” the letter states.

While the letter is aimed at the EU institutions, it is specifically addressed to Slovenian Minister Simona Kustec and EU Commissioner Mariya Gabriel. The signatories stress that their inclusion in the ERA governance will ensure that policies and legislation will be developed in a structured and sustained way. They also commit to effective engagement and structural representation of diverse perspectives.