UNICA Rectors’ Seminar “The Future of the European Universities Alliances”

The “European Universities“ initiative has captured the Higher Education sector over the last four years. Inspired by a speech on the Future of Europe by French President Emmanuel Macron at Sorbonne University in September 2017 and adopted by the EU as drivers for the achievement of the European Education and Research Area, 41 alliances have been granted EU funding for a pilot phase of three years.
European Universities can provide the long-term vision and sustainability to drive forward the transformation agenda required to fully harness the potential of Europe’s HE sector as global leader and to support the implementation of Europe’s green and digital transition. The mission of European Universities is to steer education, research and innovation in a common direction. By achieving this transformation, they are meant to underpin that Europe’s rich knowledge is a foundation for democratic, resilient and inclusive societies and key European values of academic freedom, openness and scientific integrity (see Declaration on Freedom of Scientific Research, adopted at the Ministerial Conference on the European Research Area on 20 October 2020 in Bonn). As such, European Universities are in a perfect position to drive sustainable impact on the HE sector at large in Europe and the world.

However, there is a proliferation of models, programs and formats among the alliances. The aims and objectives of the various alliances are very heterogeneous. Some concentrate their co-operation on specific research themes, others on student mobility; some aim to create a unified European Campus, others plan to concentrate on creating joint programs. Most of them hope to enable students at some point to obtain a degree by combining studies in several EU countries. Some chose partners who are very much like themselves while others went for more complementarity among partners.
The European Council has published first conclusions on this topic in May, which will feed into the European Commission’s recommendation and an up-dated call expected in September 2021.

For this discussion, we have invited representatives of the five networks Circle U, Una Europa, 4EU+ Alliance, CIVIS and Eutopia whose home universities are UNICA members at the same time, to discuss the different paths these networks are currently taking. The representatives will discuss challenges and hopes for their future development and how EU policies and funding can support them.

Among the questions to be discussed will be the following: 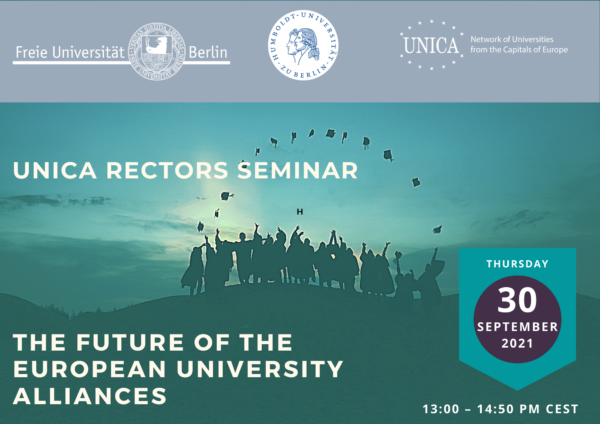