The University Network of European Capitals of Culture (UNeECC) and Network of Universities from the Capitals of Europe (UNICA) have joined forces to collaborate and inspire their members to create a webinar series called UniverCities and Culture. The main aim is to explore and discuss interesting topics, research results, co-created projects among different actors of the cultural sector, like universities, cultural institutions, and art businesses, among others.

The first webinar spotlights the theme of digitalization, culture, and art and took place on 17 November 2021.

Digitalization refers to the process of converting different forms of information, including sounds, images, texts, and so on, into this code (Hand, 2008: 3).

The arts as a form of culture is the product or the process of deliberately arranging items (often with symbolic meaning) in a way that will influence and affect one or more of the senses, emotions, and intellect.

During the webinar, outstanding initiatives were presented by university experts and researchers, where the successful combination of art, culture, and digitalization resulted in novelties. 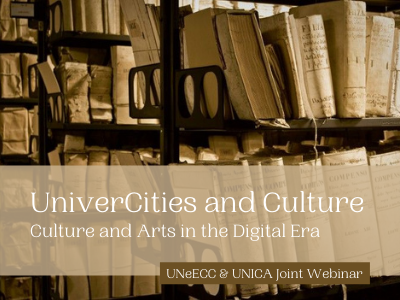