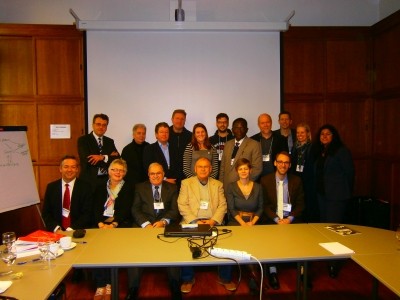 On 12 and 13 December 2013 UNICA had the pleasure to host the Expert Meeting on State Responsibility for Protecting Higher Education, organized by GCPEA, the Global Coalition to Protect Education from Attack.GCPEA is a unique coalition of leading international organizations including UNICEF, UNHCR, Human Rights Watch, the Institute of International Education’s Scholar Rescue Fund, Protect Education in Insecurity and Conflict, Save the Children International, and the Scholars at Risk Network, of which UNICA is an affiliate member. GCPEA’s focus is on identifying and responding to on-going attacks on educational institutions, their students, and staff, especially in countries affected by conflict and insecurity. GCPEA is organized around working groups, with the Higher Education Working Group (HEWG) serving as the primary voice for higher education concerns within the Coalition, and the primary coordinator of higher education activities under the GCPEA umbrella. Founding members of the HEWG include CARA, the Institute of International Education’s Scholar Rescue Fund (SRF) and the Scholars at Risk Network (SAR).In October 2013, GCPEA released a new HEWG report: Institutional Autonomy and the Protection of Higher Education from Attack (read the study here). The study examines the interdependence of institutional autonomy and security, and concludes with recommendations for strengthening both simultaneously, including further research, expert roundtables, information-sharing, and development of guidelines and relatedadvocacy.As follow-up to the report, the Expert Meeting will explore with the stakeholders present the idea of developing and seeking wide recognition of a statement of ‘Principles of State Responsibility for Protecting Higher Education,’ with the view toward engaging key stakeholders—especially States and members of the international higher education sector—in an open conversation about the importance of protecting higher education and ensuring that the section can fulfill its vital educational, scientific, economic and cultural roles.