Meeting with Dilyor Khakimov, Ambassador of Uzbekistan to Brussels 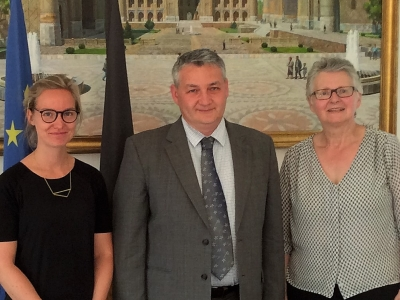 On the afternoon June 25 UNICA visited the Embassy of Uzbekistan in Brussels, where Secretary-General Kris Dejonckheere and Project & Communication Manager Aurelie Duchateau were welcomed by the Ambassador, Mr Dilyor Khakimov.

Dejonckheere and Duchateau met the Ambassador to exchange ideas on the Higher Education system in Uzbekistan as well as on the UZDOC 2.0 project, which is coming to an end later on this year.

This meeting preceded the workshop on Supervision of PhD Candidates which will take place on July 3 – 4 in Namangan State University in Uzbekistan. The following week the Uzbek partners will then travel to Brussels where they will learn about writing guidelines for the virtual doctoral centre, which is one of the project’s outcomes. During their period in Brussels, the Embassy of Uzbekistan will host a reception to the participants, allowing further discussion on cooperation in the area of Higher Education between Europe and Uzbekistan.

He holds an MBA in International Economic Relations.