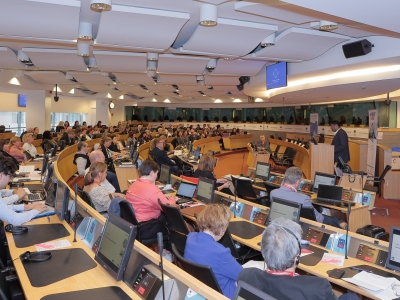 The event Higher Education Values in Practice – Integration of highly skilled refugees and at-risk academics in Europe gathered more than one hundred higher education stakeholders at the European Committee of the Regions on June 13th and 14th.

The two-day initiative, organized jointly by UNICA and ACA (Academic Cooperation Association), took place within the framework of Academic Refuge and GREET, two European projects co-funded by the Erasmus+ programme that focus on capacity building of Higher Education Institutions in assisting refugees and threatened academics on campus.

With a combination of plenary and group work sessions, the event covered different topics such as the role of European institutions, values in higher education as risk management, awareness raising, student engagement initiatives and networks & associations as advocacy tools.

Themis Christophidou, Director General of the Directorate-General for Education, Youth, Sport and Culture (EAC), delivered the welcome speech on the second day of the initiative and drew attention to the role of the European Commission on the topics under discussion by saying that “Erasmus+ programme has become an important instrument for the integration of refugees”. She also encouraged reflection on the threats to academic freedom by adding that “a scholar who was never impeded in their thinking might not prize freedom of thought, but the scholar who was persecuted for their work knows just how much it matters“.

Speakers in this event also included MEP Wajid Khan; President of the League of Human Rights Kati Verstrepen; and Delegate of the Government of Navarre in Brussels Mikel Irujo Amezaga.

One of the high moments at the event was the launch of the e-Handbook Promoting Core Higher Education Values – Perspectives from the Field. This is one of the outcomes of the Academic Refuge project which consists of an interactive reading tool that gathers inspiring practices of more than 25 stakeholders from universities across the globe. The publication was developed for Higher education stakeholders, refugee students and scholars, scholars at risk, NGOs, networks and Associations working in related fields seeking guidance and examples on how to put the academic values into practice. At the launching session Professor Stefaan Smis, from Vrije Universiteit Brussel (VUB) and editor in chief of the publication, explained that the goal of this “was not just a compilation of good practices, but rather an interactive and original Handbook”.

With the launch of the e-Handbook and the discussions at the event, the Academic Refuge project comes officially to an end, though its outcomes are expected to impact institutions on a longer term and eventually result in the development of further projects and initiatives. On the final remarks of the project, Director of Scholars at Risk Sinead O’Gorman resumed the project as one that “urges universities to put in place policies that actively promote academic freedom before a crisis occurs”.

Photos of the event available soon.